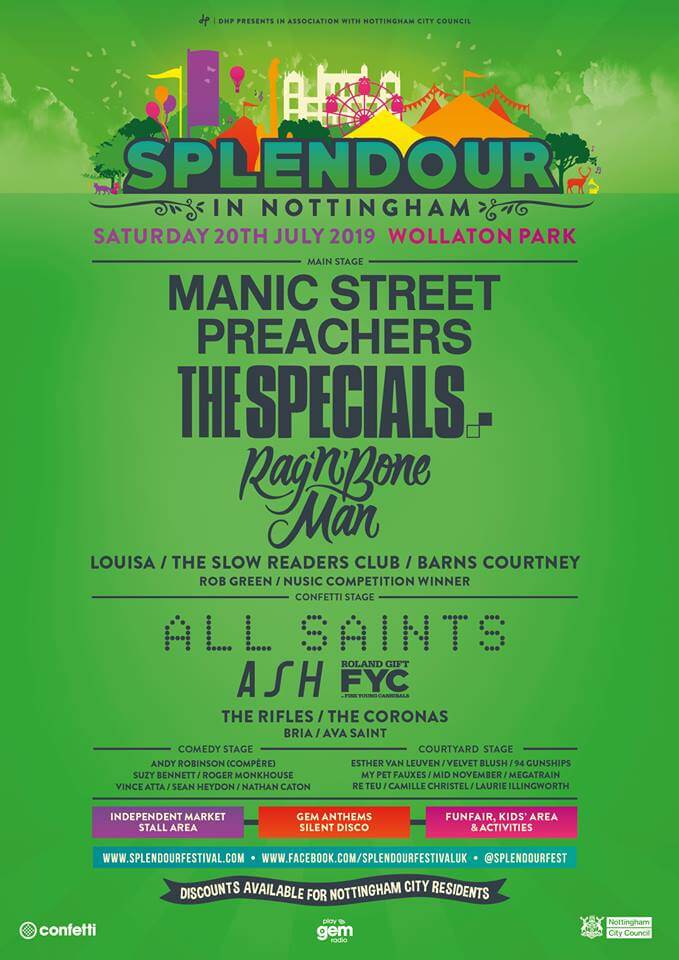 With excitement building and tickets selling at record speeds following the announcement of Manic Street Preachers, The Specials, Rag’n’Bone Man and All Saints for Splendour on Saturday 20 July, a great selection of new acts have today been announced for this year’s stellar line-up.

Northern Irish rock band ASH, Fine Young Cannibals’ singer Roland Gift and indie rockers The Rifles join the bill on the Confetti Stage headlined by All Saints, one of the most successful pop groups of the 1990s.

Throughout their career, ASH have had 18 UK Top 40 singles to their name – including “Goldfinger” and “Oh Yeah” from their UK Number One debut album ‘1977’ – won awards for singles “Shining Light” and “Burn Baby Burn” from their certified platinum album ‘Free All Angels’, and headlined Glastonbury in 1997. Formed in 1989 by vocalist and guitarist Tim Wheeler, bassist Mark Hamilton and drummer Rick McMurray, the Northern Irish rockers’ seventh studio collection, ‘Islands’, reaffirms the trio’s status as one of the most idiosyncratic and singularly thrilling guitar bands.

The high, soaring voice of Roland Gift, frontman of double Brit award-winning Fine Young Cannibals, will also join the Confetti Stage line-up. The British rock band rose to fame in the mid-1980s. In 1985, their self-titled debut album featured hits “Johnny Come Home” and a cover of “Suspicious Minds”, which topped the charts in the UK, Canada, Australia and many European countries. Following this, the 1989 album, ‘The Raw & the Cooked’, went on to top the UK and US album charts including two Billboard Hot 100 number ones “She Drives Me Crazy” and “Good Thing”.

Crowd pleasers The Rifles are back at Splendour again this year to celebrate 10 years since their classic album ‘Great Escape’. They have even teased on their social channels that a new album is on the way – much to their fans’ delight. Fresh from the stage at Rock City in February, it will be the fourth time the indie band has appeared at the festival.

Over on the Main Stage and joining Manic Street Preachers, The Specials and Rag’n’Bone Man is X Factor winner Louisa and Mancunian alt-rock band The Slow Readers Club.

After winning the 2015 series of The X Factor, Louisa became the programme’s youngest winner at the age of 17. Her solo single, “So Good”, charted in the Top 20 UK Charts and received gold certification, followed by “Best Behaviour” which certified silver. The dance single she released with British band Clean Bandit, “Tears”, also became a hit in many European countries.

Described by NME as the next northern pophouse, The Slow Readers Club have supported bands such as Catfish and the Bottlemen and James. The indie rockers join the Main Stage line-up at Splendour fresh from their extensive sold-out UK tour and hot on the heels of a benchmark year which saw them earn a UK Top 20 album, ‘Build A Tower’.

Another Irish rock band joining the Confetti Stage are The Coronas, whose 2009 studio album ‘Tony Was an Ex-Con’ won Best Irish Album at the 2010 Meteor Awards, beating Snow Patrol’s “Up To Now” and U2’s “No Line on the Horizon”. Local East Midlands talent BRIA and Ava Saint have also been announced.

Also announced on the Main Stage is singer-songwriter Barns Courtney and local rising star Rob Green. The opportunity to open Splendour will once again be made possible by the winner of Future Sound of Nottingham, organised by Nusic.

Buckinghamshire born Barns Courtney released his first track as a solo artist, “Glitter & Gold”, in 2015. As well as reaching Number One on the UK Spotify Viral Chart and Number Two on the iTunes Alternative Chart, the single received radio play on BBC Introducing Suffolk and BBC Radio 1. He has gone on to open for artists including The Who, The Libertines and Ed Sheeran, and has had his debut single streamed more than 41 million times on Spotify.

Over the years, local lad Rob Green has progressed to play the different stages at Splendour. This year will be his first time performing a slot on the Main Stage. His latest EP – ‘ROB.GREEN EP’ – debuted in the Top 40 of iTunes Album Chart in its first week, and reached number three in the iTunes RnB Chart. He has won international critical acclaim for the innovative, continuous shot music video for Blue – the EP’s debut single. Rob is currently working on his debut album, which is aimed for release this year.

Across the park on the Courtyard Stage is My Pet Fauxes, Mid November, Esther Van Leuven, Megatrain, Velvet Blush, 94 Gunships, Re Teu, Camille Christel and Laurie Illingworth. Located in the Courtyard at Wollaton Park, year-after-year the stage is packed with acts that are earmarked as ones to watch.

Away from the musical talent and on the Comedy Stage is compere Andy Robinson, Suzy Bennett, Roger Monkhouse, Vince Atta, Sean Heydon and Nathan Caton.

George Akins, owner of DHP Family, organisers of Splendour, says: “The reaction to the Manic Street Preachers, The Specials, Rag’n’Bone Man and All Saints announcement was epic, with tickets selling faster than ever before. We know fans of Splendour were eager to find out the rest of the line-up and we think it won’t disappoint with something on there to please everyone in the family. It’s going to be a great day out; make sure you grab your tickets while you can.”

Hugh White, Director for Sport and Culture at Nottingham City Council, adds: “Every year, Splendour gets bigger and better – and 2019 is no exception. We’re proud to be a partner on another fantastic, family-friendly festival in Nottingham, and we can’t wait for as many people as possible to join us in July.”

The award-winning music event is Nottingham’s biggest party of the summer, with a fun fair, fringe entertainment stage, kids’ area and entertainers out and about in the crowd, as well as Gem’s extremely popular Weekend Anthems silent disco, back for another year.

To stay in touch with festival news following Splendour on social media:

📅 How's this for a little #OnThisDay action!! 📅 On 20th January 2017 we had @THEHUNNABAND here at Rock City for a huge sold out show!! 🎸🎸 Were you at the gig? Let us know! It would be great to see some photos as well! https://t.co/ZCEgiys6TV

What's this?? A GIG ANNOUNCEMENT 😱😱 We're over the moon to say Scottish icon @midgeure1 will be joining us in February 2022 for his 'The Voice & Visions Tour' 🎵🎵 Tickets go on sale 10am Friday, set a reminder here: https://t.co/nCwNmmtnan https://t.co/eprqr5PLWu