As the August 21st release of their eagerly anticipated new album ‘RE-ANIMATOR’ approaches, Everything Everything can now confirm details of a headline tour that commences next March. The tour represents their first in support of the new album and is also their first full UK and Ireland headline tour in three years.

The tour includes a London show at the historic Roundhouse, which is sure to be a hot ticket as the band’s last London show was Alexandra Palace on their previous tour, and a homecoming show at the Manchester Academy. 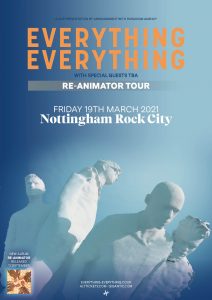