Ferocious Dog will be playing the Rock City Basement as part of the Hey Hey Hey clubnight after the New Model Army show upstairs in the main hall. This show is free to anybody who has a New Model Army Ticket.

Ferocious Dog are from Warsop, Nottinghamshire and started out way back in the late 1980’s. They want to entertain you with their wild melodies and have influences from folk through to ska, rock and back into their bountiful musical past. They want to bring you joy and hope you will join them to dance many a night away. 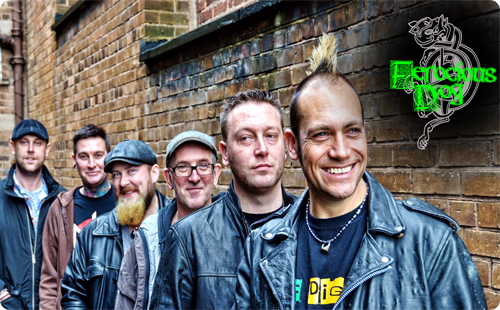 Due to huge demand, there will now be an acoustic session with various acts in the Basement from 2:30pm. Doors to the Main Hall open at 18:00.

Here’s the schedule for the day!

Creating their own take on Traditional Celtic folk, Ferocious Dog takes the traditional instruments; fiddles, whistles, mandolins and mixes them up with a bit of, raw, buzz saw rock n’ roll attitude.

With their unique, aggressive yet feel-good music they tear up venues across the country often bringing their faithful Hell Hounds along for the ride. For many years Ferocious Dog have appeared at small venues and pubs, until in 2009 where the band were given the opportunity to play at Bearded Theory Festival, they went down a storm, were asked to return the following years and ultimately playing the main stage in 2012 where their popularity grew tenfold. After this opportunity, gig and festival offers from all over the county starting coming in thick and fast, and on the back an eponymous album, Ferocious Dog are playing and headlining festivals across the country. They made history this year by become the only unsigned act to ever sell out the Rescue Rooms in Nottingham, not only once but twice.

With a successful 2014 autumn tour including sold-out shows, and with their new guitarist, 2015 is already looking bright, catch this band whilst you can – you will not be disappointed. “As someone who has played with the Levellers, Oysterband and Wonderstuff… Ferocious Dog are carrying on the tradition of folk rock the

way it was meant to be done” – Dan Donnelly

“The bite, here, is as fierce as the bark. But Ferocious Dog makes subtly persuasive sounds, too. In a field full of would-be wolves… They’re out for a long run.” – Nick Burbridge

‘Ferocious Dog’ – straight from the heart and not for the faint hearted (July 29, 2013) Folk punk says it all. Consider the band’s name’, Ferocious Dog leaves little room for doubt. Then again, there’s a lot to be said for removing ambiguity from the outset. And that’s what you get from Ferocious Dog’s self-titled debut album – nothing ambiguous, nothing diluted, nothing toned down – just pedal-tothe-metal, high-energy folk punk. So what do we have here? Their guitar riffs could tear up the tarmac, bass lines drive nails through steel and withering fiddle breaks slash the air; there’s also haunting melodies and barbed lyrics that add iron and intent to their songs. You’re into it from the start with ‘The Glass’, off into an energetic step with ‘Lee’s Tune’ and rocking out with ‘On The Rocks’. The faintly plaintive opening of ‘Too Late’ gives way to a frantic percussion race and vicious fiddle attack, there’s a similar feel to the powerful ‘Lyla’, while the biting observation of ‘Freeborn John’ proves that nothing changes; well not for ordinary folk anyway. With more machine-gun percussion, searing fiddle and rabid vocals ‘Hell Hounds’ takes no prisoners, while the essence of rebellion oozes through ‘Quiet Paddy’ with a chunk of tough lyrics. These are songs that broadcast worth-hearing, tough messages, listen to ‘Criminal Justice’ juxtaposing simple string-led sections with frenetic liberation or the pointed observation of ‘Blind Leading The Blind’. I’ll refrain from making ‘sounds like’ statements about Ferocious Dog, no doubt many will. You can make your own comparisons. However, among the well-known and not so well-known folk punk genre bands, Ferocious Dog is up there with the best of them. Dedicated to the memory of Lee Bonsall, one of our soldiers haunted by PTSD, this is an album raging against the machine, it’s folk fighting for our rights, a whirlwind of accusation and a blunt refusal to compromise … straight from the heart and not for the faint hearted … and it’s also bloody good fun. Take a chance, be ready to dance, find Ferocious Dog here: www.ferociousdog.co.uk Reviewer: Tim Carroll

“Opening up the Jagermeister Stage we have those mad hounds at FEROCIOUS DOG. One of our most established bands, it’s really hard to think of an act more suited to opening a festival stage because these guys make it look so much fun. Their fast folk literally has people swinging each other by the arms, the Jagermeister Stage is turned into a full-blown Ceilidhe and made all the better for it. Intricate fiddle solos, clever lyrics and sheer showmanship – these guys nailed it.” Review by Maddie at Nusic

TIMES FOR THE DAY:

“Ferocious Dog are the new noise on the block – and are surprising everyone with their rapid ascent. There is no way they’re following any hipster templates – fronted by a big burly man with a mohican who sings impassioned political songs of broken Britain whilst his band seethes like a punky Levellers – they are the music business’s worst nightmare – a great band who are going to make it without anyone’s permission”. (John Robb, Louder Than War, Glastonbury, 5th July 2016).

Ferocious Dogs 3rd studio album, The Red Album, is released on November 10th 2017 and is already receiving rave reviews. The Enemy Within tour will feature tunes from this album as well as old favourites from previous releases.

2016 was a defining year for Ferocious Dog. From playing Billy Bragg’s Left Field stage at Glastonbury in front of a massive crowd, to sharing the stage with The Levellers on their sold out European and UK tour in November and December and many sold out shows inbetween. Ferocious Dog left the audience under no doubt that they had witnessed a band that has the talent and passion to go on to dominate the folk/punk music scene. With European and UK tours completed, and slots at some of the UK’s and European favourite festivals, 2017 has been another exciting year so far in the ascent of this exceptional band.

Ferocious Dog are a full-on six-piece band that encompass folk infused with rock, reggae and Celtic vibrations. The combination of instruments creates a palette of sound that offers infinite variations: going in hard to get the audience up and moving, or slipping into melodic passages and dub-like fusions. The songs are deeply personal and their fans can really identify with the words. Dan Booth, on fiddle, and John Leonard, playing just about everything with strings, bring a huge amount of intricacy to the breakneck pace of their songs. Les Carter (ex Carter USM) on guitar and the rhythm section of Alex Smith and John Alexander hold things together brilliantly, and with Ken Bonsall’s lyrics and sheer likability, you have a whole greater than the sum of its parts. Ferocious Dog are well known and popular for their high octane live performances.

In November 2015, the band sold out Rock City in Nottingham in advance – a historic moment, the first time in the 35 year history of this auspicious venue an unsigned band has achieved this feat.

The role of the infamous Hell Hounds must not be underestimated – an ever-growing legion of fans who follow the band up and down the country. They form Totem poles of people, in the mosh pit. They bring energy and passion to the gig whilst always welcoming the less initiated members of the crowd to join in and swell their ranks – everyone has a ball.

“Without doubt Ferocious Dog are one of the best bands on the UK folk punk circuit as they brought Rock City to life with their stomping, energetic sound. Not only are they one of the most hardworking bands around, but as their fans will testify, they are also one of the most approachable”. Nottingham Post. Kevin Cooper