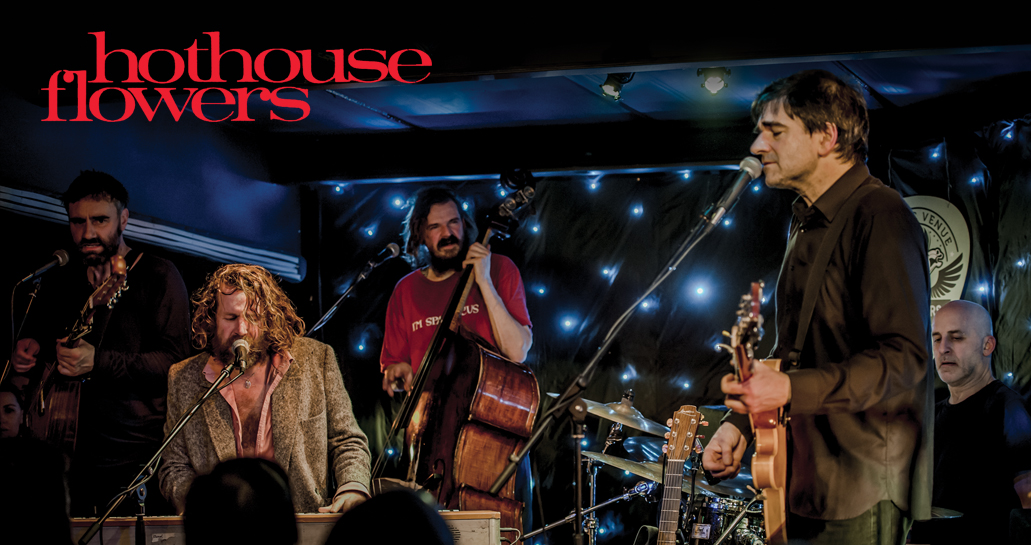 Hothouse Flowers continue to destroy venues across the country and further afield. “I take pleasure in facing adversity … I don’t see perfection as something that can be created externally… It is an experience. A connection between listener and player… if you feel the music they will feel the music” says singer and frontman Liam ó Maonlaí.

Since the release of their last CD, “Into Your Heart” Hothouse Flowers have been playing steadily around Ireland, America, Great Britain, Japan and Europe. Their shows last between two and three hours depending on the level of fever in the room. Most recently their sound has been enhanced and reinvigorated by the return of Peter O’Toole on bass, bouzouki and vocals. Drumming with the band these last ten years is Dave Clarke. Dave has been a drummer in Dublin since the beginning. His commitment to the beat is mesmerizing. His style has been a force in the direction of Hothouse Flowers today. “I have had to find levels in my voice I never knew I had”.. ó Maonlaí on playing with Clarke. Also playing with the band these days is Dorset man Martin Brunsden on double bass and backing vocals. His musicality adds yet another dimension to the ever evolving sound of the band. “I know by the look on Martin’s face whether the gig is going well or not! His smile and onstage interaction is infectious!” remarks guitarist and founder member Fiachna O Braonáin.

There is an unpredictable energy in the band that harkens back to the “Risk” days. They call upon their grand repertoire to create a show that is unique to the time and place. No two shows are the same. Improvisation can come at any point and allow the men express their brightest and their darkest influences. “Rock and Roll is not about safety or politeness, it is not about perfection either. It is expression and it is spirit.” Humour is also never far from a Hothouse Flowers night. They do not take themselves seriously however, there is no mistaking the musical integrity among them as they open up to each other in musical dialogue.

Fiachna, Liam and Peter are traditional musicians. This allows for moments of ancestral connection. What was a second before a Doors-like workout, becomes an earnest and a timeless offering to the memory of Currachaí na Tra Báine. A song inherited by Fiachna describing the blow inflicted upon a community and a family due to drowning. This moment and moments like these set the Flowers apart from almost any other band of their time and trade. They are carriers of Culture and all of what that entails.

Hothouse Flowers came out of tough times. They played the streets and brought the streets to the stages of the world. Individually Fiachna and Liam are enjoying a broadening of their horizons. Fiachna has been producing and presenting radio and television programmes and working as a composer of music for television. Liam has been collaborating with the Fabulous Beast Dance Theatre Company. Still Hothouse Flowers has not yet fulfilled her destiny. The possibilities are endless. The will is there. Ni fada go bhfeicfear.