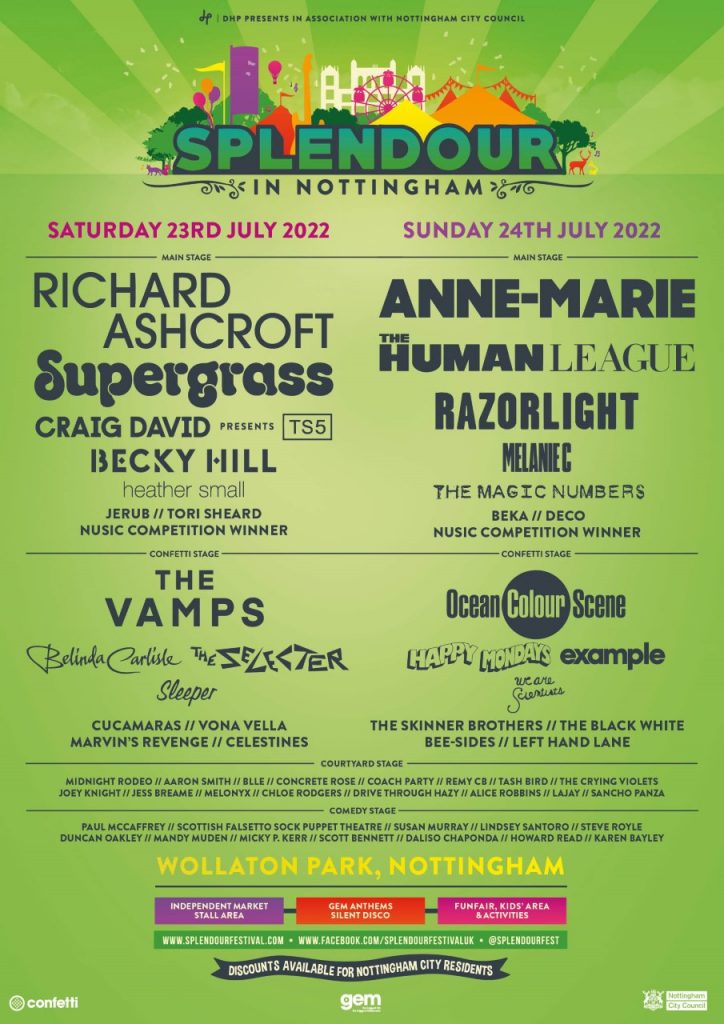 Splendour Festival just got even better with chart-topping rapper Example, British soul singer Heather Small and rock band We Are Scientists joining the bill, plus more, along with over 20 rising stars from the local music scene and Comedy Stage acts also announced.

They join the already announced headliners including Richard Ashcroft, Anne-Marie, Supergrass, Craig David presents TS5, The Human League, Razorlight, The Vamps, Ocean Colour Scene, Happy Mondays, Belinda Carlisle, and many more.
Nottinghamshire’s biggest music festival is back this summer and the organisers, DHP Family, are making it bigger and better than ever before with a line-up stacked out with headliners serving up contemporary and classic hits galore covering two days (23 – 24 July 2022).

George Akins is MD of DHP Family. He says: “We want to give the people of Nottingham something to look forward to with our biggest Splendour ever so have added even more big names, as well as a fantastic line-up of more than 20 local acts. Bring on the summer!”

Example is sure to get the Splendour crowd jumping with his catalogue of platinum albums and chart-topping singles, including hits ‘Changed the Way You Kissed Me’, ‘Stay Awake’ and ‘Kickstarts’. Back with a new upcoming album, the singer-songwriter-rapper is no stranger to

the festival scene. He has previously headlined at Stereosonic alongside Avicii and Calvin Harris, as well as Parklife and opened for Drake at the last ever Future Music Festival.

Fresh from the stage of The Masked Singer, soul singer Heather Small is the former lead singer of the band M People, which clocked up a string of hit songs and sold over 10 million worldwide in the early 90s. Small launched her solo career in 1998, with her signature song ‘Proud’ in 2000 earning her international success.

Rock band We Are Scientists are back in Nottingham following an intimate acoustic performance at Rough Trade last autumn. With their winning formula for guitar pop hits with perfect hooks, the band’s breakthrough success came with their debut studio album ‘With Love and Squalor’, which sold 100,000 copies in the first six months. Their latest album ‘Huffy’ includes some of the biggest sounding rock songs of their 15-year career.

Over the years, Splendour has provided a platform to many rising stars from the local music scene, with many going on to achieve international fame. As the county’s biggest music festival, it’s a fantastic opportunity for up-and-coming local acts to perform in front of a crowd of more than 25,000 festival revellers.

“It’s incredible to see amongst the great line-up so many local acts sharing the stage with seasoned performers. These acts include Confetti student band Marvin’s Revenge, who having won the recent Battle of the Bands in front of a sell-out crowd at Metronome, win a coveted spot on the Confetti Stage.

“It will be fantastic seeing them perform, alongside our other stellar Confetti acts: Left Hand Lane, The Black White, Jess Breame; and Drive Through Hazy, fresh off the back of recording this year’s Confetti/Denizen single with producer Shuta Shinoda (Hot Chip/Anna Meredith/Ghost Poet).

“What an amazing opportunity it is for them to play in front of the huge Splendour crowds!”

Weekend tickets start from £85 for adults, with day tickets priced at £56. Accompanied children aged 10 and under go free, and Nottingham City residents are eligible for a discount. VIP options are also available across all ticket types. Tickets can be purchased from splendourfestival.com To stay in touch with festival news, follow Splendour on social media: 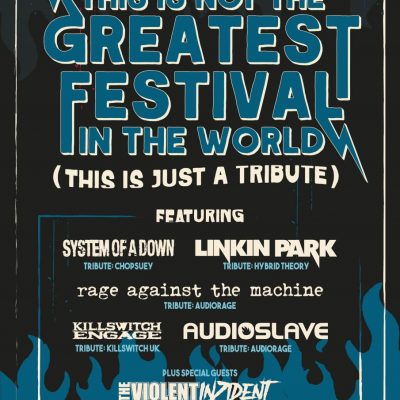 An absolute pleasure as always guys, come back soon!! 🤘🤘 https://t.co/psDCh7Agzu

RT @Rock_City_Notts Well that was A LOT of fun. Well worth the wait. See you next time @ENTERSHIKARI. 🤘 https://t.co/cxxYbH5w9M