We’re counting down the days until Beat The Streets Festival finally returns! The awesome multi-venue festival raises much-needed money for Nottingham’s homeless charity Framework on Sunday 30th January. It’s a huge day for the whole city to come together, with lots of local artists performing live across 7 stages. This year, the coveted final slot goes to Rob Green! He’ll be playing on the Rock City main stage at 21:15!

We had a lil chat ahead of the show…

So, there’s this lil thing called Beat The Streets on Sunday!! How are you feeling about it?

SO EXCITED! Beat the streets is my first full indoor gig since March 2020 and I can’t wait to perform at this festival as my first one back!

We heard you had a big anniversary recently, care to tell us more??

10 years ago – on January 13th 2012 – I launched my first ever EP; Parlour Tricks to a full capacity Nottingham Contemporary. Parlour Tricks marked the very start of my career and a journey with some incredible people, including Greg and Jack from Outlaw Music who made me their first signing in 2011. I was completely unknown at the time and the work they did to launch me was unbelieveable; it’s been an incredible journey and I loved reflecting on how it all started to kick off the year.

The word is you’ve got some insane stories. How about the biggest or most nuts act you’ve ever been on the road with?

Haha! Welllll – One of the biggest was Earth Wind and Fire. I supported them on their UK arena tour in 2018 -that’s a HUGE team; there’s about 20 people on stage in their show and an even bigger team backstage, and they travel with their families. When I walked into catering on the first day I was so nervous; and Verdine White (legenddd!!) stood up called me by name and introduced me to each and every person; everyone! Then he invited the whole band to watch my soundcheck. (Honestly the most nerve wracking soundcheck ever haha!)

They were so great to me and made me feel so welcome – on the last night they all invited me to join them on their Paris show that weekend! We had less than 24 hours to drive from Nottingham to Paris to make the show – and we did it! (Just!) We ran into the Paris arena from the car park and JUST made soundcheck by 1 minute!! Amazing! I had also translated my entire opening intro into French on the drive over!! PHEW – it was wicked, very sweaty, I’ll never forget it. 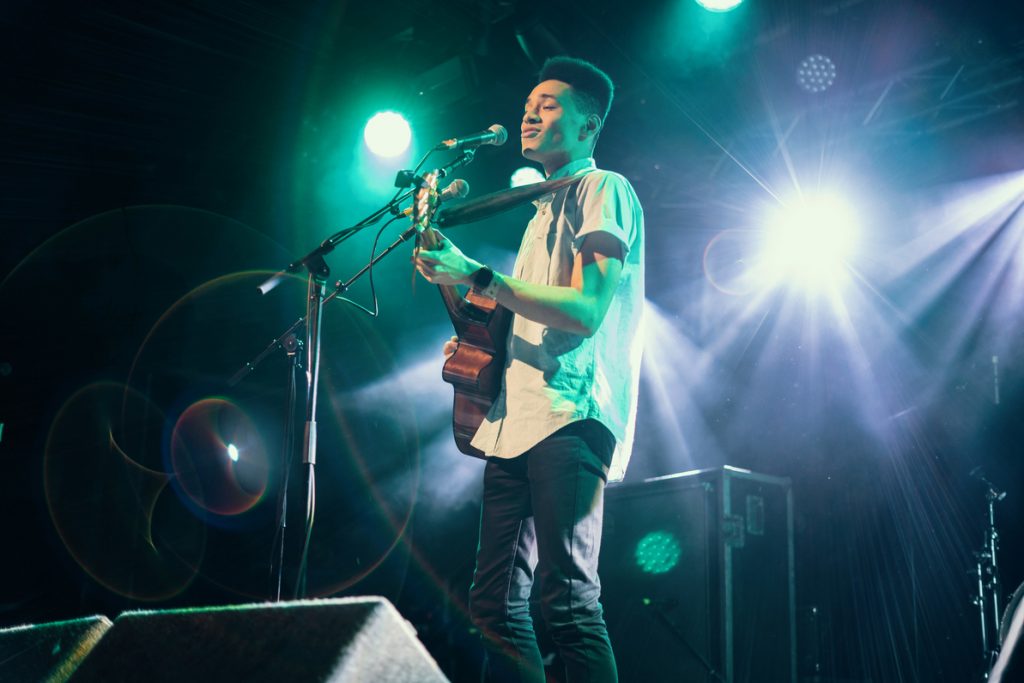 …Oh and didn’t you support a hologram at one point??

Oh yeah! That was actually my last indoor full set. The Whitney Houston Hologram tour – I was booked originally to open the set for the 10 UK dates – The show was so hi-tech and the music was incredible. All the band and the dancers are live and all in sync with the hologram; it really is incredible?!

My favourite thing… I mean I don’t know if I’m allowed to share this haha! BUUT – after my soundcheck, before the band, they’d do a hologram soundcheck. It was mainly to set the tech, but as Whitney’s vocal is synced to the hologram it means that for that hour it’s just Whitney Houston’s voice, Acapella, echoing round these huge arenas.

Every day (and I really mean every single day) I’d sneak in and sit listening to her voice. Filling this HUGE space. The show was such a loving tribute to her music and I felt so honoured to do that tour!

On the last day in London they asked me to join them for the whole European tour starting the following day… I couldn’t believe it!! I said yes, (of course!) – but that was the day before lockdown in March 2020. And the rest is history…

You’re a Nottingham legend and you’ve played the Rock City stage for Beat The Streets before, but this time you’ll be closing the main stage!! How does it feel?

Playing Rock City is always like a dream come true. I think it always will be. You can’t be brought up in Notts, do music and not have fantasised about playing Rock City. It’s legendary. I saw my first gig with my dad there (The Script for their first album tour!) to stand in there and get to headline Main Stage is phenomenal I’m bringing the biggest energy I have; because I think we all need to celebrate – we’ve been through a LOT these past two years, all of us. I think this festival is a solid sign that we’re coming out the other side.

You normally close your set with a medley, maybe you can give us a sneak peek about what to expect? Then we’ll all know what lyrics to learn!

You heard the man! Be sure to revise your Whitney lyric knowledge before Sunday!

Wristbands for Beat The Streets are available from just £8.00.

PAY WHAT YOU CAN
BUY TICKETS